If You Don’t Hire Blockchain Developers Now, You Will Regret it Later 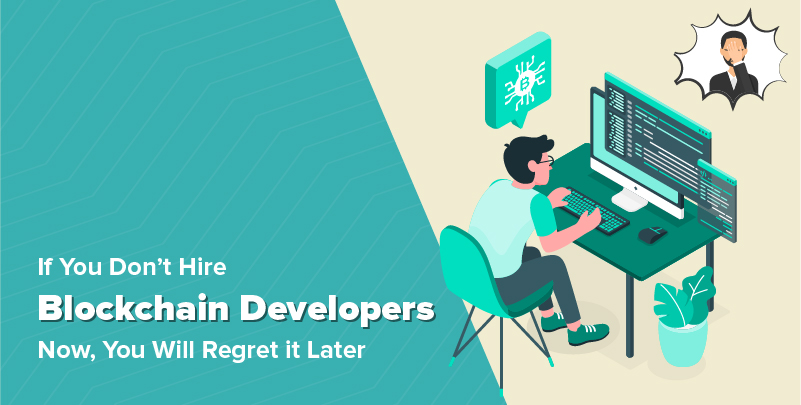 Blockchain technology is the new buzzword with all tech-driven companies looking to leverage the technology to their advantage. The technology is trending amongst businesses as it provides a platform, which makes it easier to make cross-border payments, improve customer service, provides more robust cybersecurity, transparency and better record keeping.

The technology does not depend on a middleman, Government currency, or third parties for verification. Additionally, transactions are recorded across thousands of computers across the network, making the data secure, transparent, and decentralized.

The Blockchain Data structure has an add-only format, which means only new blocks can be added. Information stored in previous blocks cannot be altered without changing the existing blocks' data.

Data stored in blocks are stored in a cryptographic format using encryption. New blocks can be added to the chain only after a thorough verification process after consensus between ledger participants.

Blockchain is a distributed ledger, and all participants have access to the same documentation. The Digital copies all root back to the same digital information. 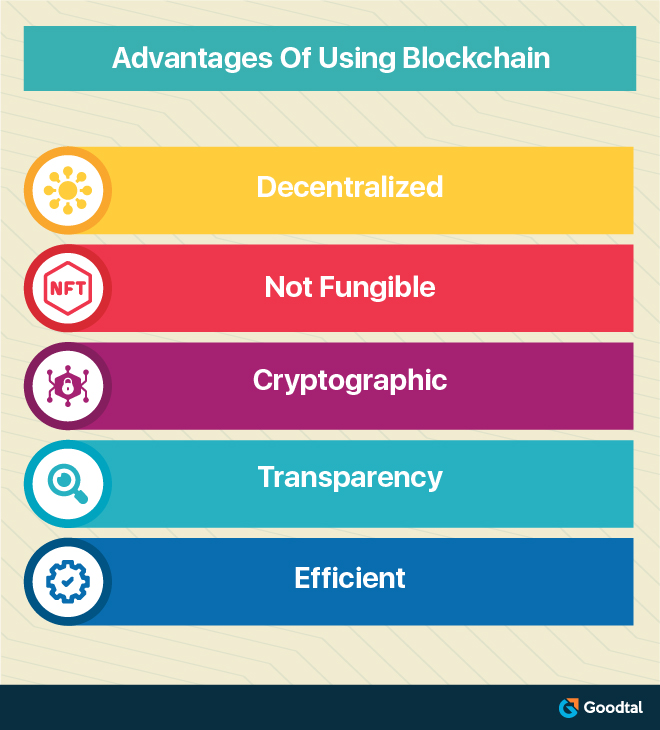 Blockchain technology is also cost-effective as the transactions themselves do not cost anything. The other advantage is that it is faster than traditional payment methods as all data is stored electronically.


How Blockchain Will Help Your Business Grow?

Blockchain Technology made its first appearance with a cryptocurrency called Bitcoin. It can be used for several applications other than cryptocurrency. Blockchain technology provides transparency and an added layer of security. This makes the technology appropriate for most applications on the internet, as Cyber Threats are a considerable risk for any tech-based business. Thus, incorporating Blockchain technology will help in further expanding the Business with a degree of confidence.

Why Go for Blockchain Technology?

The most significant advantage of Blockchain is that it is highly secure as compared to any other existing technology. The reason is that data in a block cannot be altered; only the subsequent blocks can be altered. An advantage of this structure is that any malicious activity will be immediately detected. For this to happen, an agreement should be reached between the network majority.

Blockchain is free as far as transactions are concerned, but setting up the infrastructure will cost some amount. However, the transparency & security it provides outweighs the costs. The application is not restricted to financial transactions but can also be used for online voting, copyright protection or medical records. Several diverse industries can also use blockchain technology. 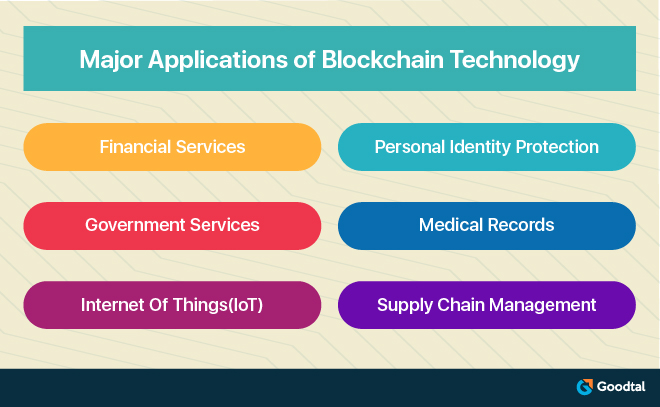 At present, Blockchain technology is used mainly for financial services. The cost-effectiveness, transparency & speed it provides makes it an obvious choice for Financial Services. Tracking, reporting, trading & settlement can all significantly benefit from Blockchain.

Governments of many countries across the world have a reputation for being corrupt. The application of Blockchain technology in fund transfer can eliminate the pilferage of Government funds by middlemen or officials.

Online voting has long been neglected as it is not considered free and fair. However, Blockchain technology can be used to ensure that online voting is transparent & secure.

The Internet of Things(IoT) consists of several smart appliances which generate a lot of data. Blockchain Technology can be used to store the data, making it more secure and reducing the risk of cyber criminals' theft.

Blockchain digitizes assets with IoT sensors, allowing companies to identify and track their assets. Assets condition & location can both be known by the company. All the data regarding assets can be stored using Blockchain.

Digital wills can eliminate the possibility of being tampered with by any of the inheritors. Digital wills can be made in the form of a Smart Contract which will be executed automatically on the testator's death.

Doctors & Hospitals can store patient records on Blockchain, which can be updated & retrieved whenever required. It can save a lot of time, which can otherwise be lost in searching for records. Thus, timely treatment could be provided to critical patients.

Supply Chain data is generally not visible & transparent, leading to many disputes between suppliers, manufacturers, and consumers. Blockchain technology can be used to develop a Supply Chain Management system that ensures credibility to all stakeholders. As a result, it is a win-win situation for all concerned, and disputes are minimized.

To leverage the blockchain technology and its wide range of applications, businesses should hire blockchain developers.

Why Should You Hire a Blockchain Developer?

Software Development is not restricted to Web Development & App development. If you want to set up a new online business, a lot of planning needs to be done, including how to handle the finances. The company will have to keep data about a lot of credit cards secure. If you go for Blockchain, you will not need to store such sensitive information in your database.

Skills You Should Look For In A Blockchain Developer 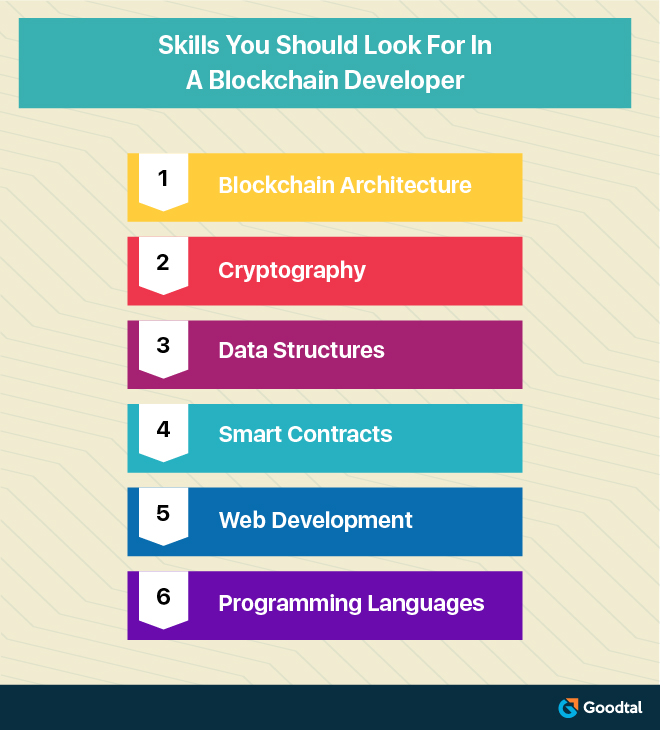 A Blockchain Developer should fully understand how Blockchain works, and the architecture used to construct it. They should have a command over technologies like Smart Contracts, Hash functions, Cryptography, and Distributed Ledgers. Along with this, they should also be familiar with four types of Blockchain architecture 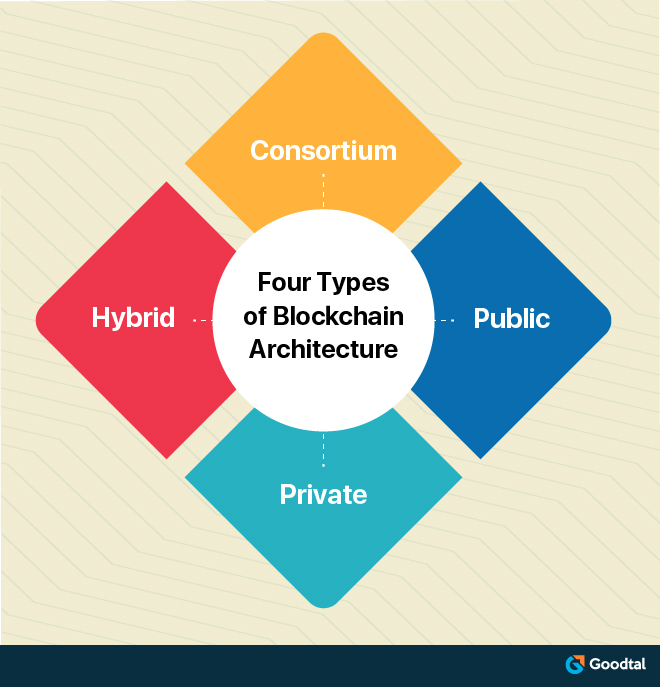 As data stored in blocks is encrypted, Blockchain Developers should have a strong foundation in cryptographic concepts like wallets, keys, and digital signatures. They should know public-key cryptography to prevent unauthorized access to data.

Each block in a Blockchain can be considered a type of Data Structure, clustering transactions for the public ledger. Hence, a Blockchain Developer should know various types of Data structures like graphs, heaps, hash trees, and Merkle trees.

Each block can be assumed as a Data Structure. Block can consist of a header, which is a smaller element than a block. Blocks have hashes that define the block and each time a change is made to the block; the hash is modified as well.

Smart Contracts are electronic contracts that allow two parties to exchange Goods & Services without an intermediary. Smart Contracts have become popular with Blockchain implementation, and Developers should be able to understand how they function and enforce business logic. Programming languages for Smart Contracts like Chaincode, Solidity, and Vyper should be thoroughly learnt.

Blockchain Apps are called Decentralized Apps(DAPPS), and a Blockchain Developer should be well versed with the technologies required for Web Development. They should not only know how to develop them but also optimize and secure them.

A Blockchain Developer will need to use different programming languages depending on the platform used to implement the technology. They should be proficient in one or more programming languages, including C++, Python, Java, and JavaScript. A strong foundation in Object-Oriented programming and familiarity with development libraries and frameworks is needed.

Why Is Blockchain Mobile App Different From Other Apps? 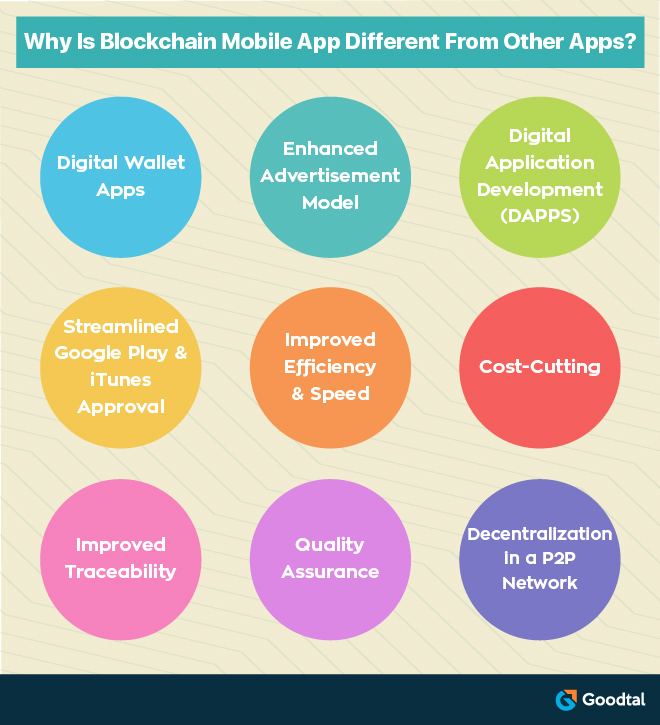 Blockchain technology can work in the background to determine how effective an online advertisement is by collecting data about the users. Earlier advertisers calculated Return on Investment(ROI) based on the Cost-per-involvement principle but using Blockchain Technology, "Cost-per-Attention" can be calculated. This is much more effective than the former, and the users also get incentives by using the App as digital coins.

It is not easy to get an ordinary app listed on Android or iOS app stores. The process to get your App listed for subscription on this store is cumbersome. However, Apps developed with Blockchain technology are ranked separately using a decentralized public ledger, which is a fair and transparent process.

Traditional record-keeping methods involve entering information manually and storing it in a database. Blockchain Technology allows for storing data in a much more efficient manner and without errors. The information is stored in a decentralized public ledger, which is transparent and more secure.

All companies try to reduce their expenses as much as possible without compromising on standards. Blockchain Technology allows firms to trust the technology, even if they do not trust their trading partners fully. With this technology, there is no need to oversee repetitive transactions as the Blockchain system will ensure that they are performed erroneously.

Blockchain Technology can be used extensively in Supply Chain Management. All the information about products in transit can be stored using Blockchain. The location of each & every batch of goods can be known in real-time, making them traceable. Companies can also learn about their inventory and place orders for raw materials/spare parts in real time, preventing losses due to latency.

Blockchain Technology can be used to know where a particular product came from and other details regarding the manufacturing process and its journey in the supply chain. Integrating a product with a Blockchain ledger makes it easier for executives handling the system to track the products.

Decentralization in a P2P Network

It does not matter which domain you specialize in; Blockchain technology can help you in increasing productivity & Customer Loyalty.

Victor Ortiz is a Content Marketer with Goodtal. He likes to read & write on technology-related topics, is passionate about traveling, exploring new places and watching movies.

Be first to respond

Looking for assistance in choosing a company?